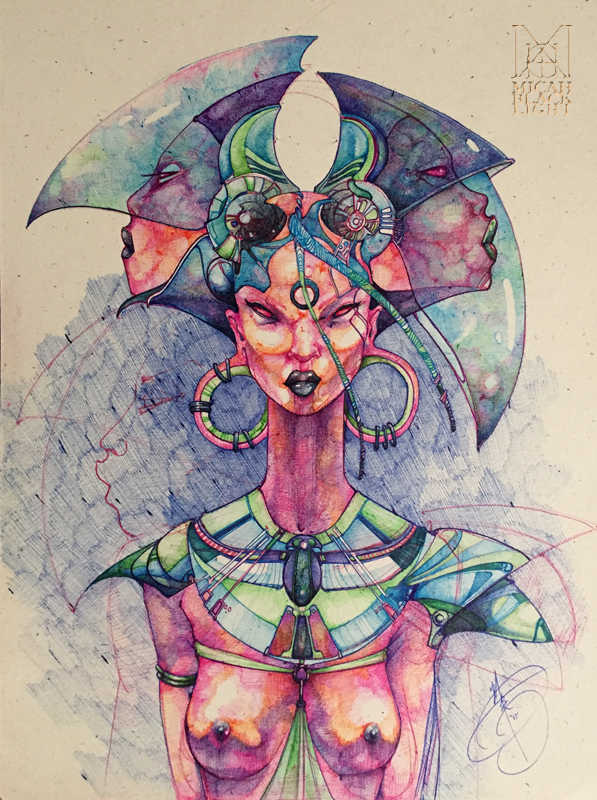 A Description and Origins

I walked into a room one day many years ago and saw a large-scale painting of a Moorish warrior. Scimitar, royal robes and armament, regal bearing; the dark-skinned visage stared out at me and I was awestruck by the visceral nature of my reaction. It was as if I had been thirsting for something without knowing what for aeons, and in that instant was presented with exactly the cure for my craving.
I think I am not the only one thirsty—I wish to fulfill that craving in others.
I want people to see my work and see echoes of themselves: past, present, and future.

With this series I aim to create a melting pot of vast proportions; multiple cultures, sub-cultures and archetypes combined into single images. Those we are used to seeing, depicted alongside and encompassed within a great many we almost never see.

First, I am mixing the technologically advanced apparatus of future civilizations with mythical creatures and the visual aesthetics of cultures from all over the African diaspora up to and including places like Southeast Asia. To this wondrous madness I am adding what I think of as the single element that will elevate this project to a completely other realm: the ethos of urban black inner city culture.
The commingling of all these disparate elements culminates in my version of Afro-futurism.

As a brown male in a country and world that feels to me as one that frequently depicts brown people in very unflattering and even dangerous lights, I wish to affect change to many of these dominant narratives. I strongly believe that art, and fantasy art in particular, in all its forms, has had and continues to have profound effects on people’s psyches. I think it opens doors and creates new horizons in our minds that would not exist or be accessible otherwise.

Moreover, the vast majority of super heroes/heroines/villains, etc. that I am exposed to, that I grew up idolizing and fantasizing about being, have looked like I do not. That is to say European, white, aryan. From religious super heroes like Jesus and angels to those wielding light sabers from Star Wars, all the way through the spandex and cape-wearing variety, the great bulk of them are not brown. Though this is slowly changing, it is the environment a great many of us grew up within. I am deeply moved by the prospect of bringing a new
take to ancient archetypes. One of the ways I wish to bring a fresh lens is by creating some of the kinds of images I want to see: beautiful, engaging, enigmatic and ultimately intriguing creatures, beings, characters and archetypes of color.

My goal is to create a beatiful body of work consisting of hand-drawn, large-scale, gallery-level portraits executed completely in ballpoint pen. The intention is to have them serve as the solid foundation for the ever-expanding series I call the Faced Project.

I have already come to know that creating fantastic works of this size entirely out of ballpoint pen pushes my boundaries and stretches me as an artist in ways I can’t fully comprehend. I am using the imperative of bringing these beings into existence as the means by which I hone my craft. These beings are serving as one of the Muses that evolve me as an artist. I am exalted simply considering the possibilities and grateful for the potential of realizing this dream.

The series I am calling the “Faced Project” has only three rules at present:
• the images must come from my imagination [meaning little or no references]
• they must feature beings of color
• ballpoint pen must be the principle tool I use to create them. 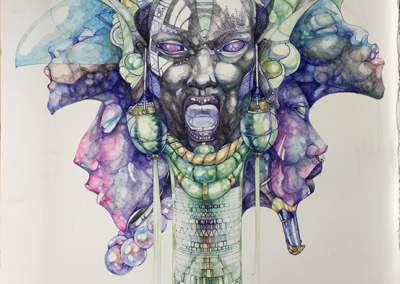 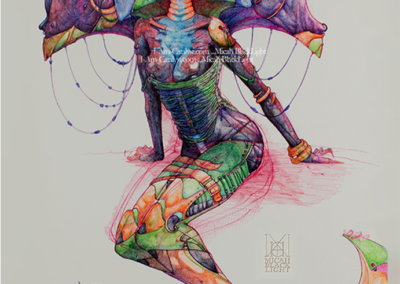 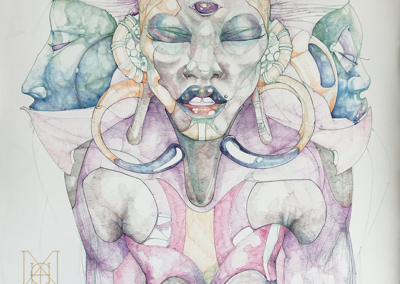 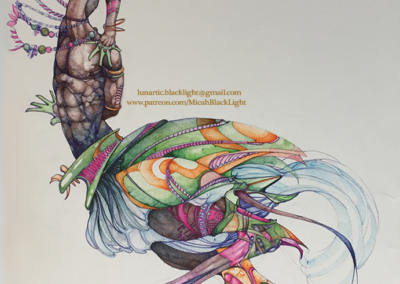 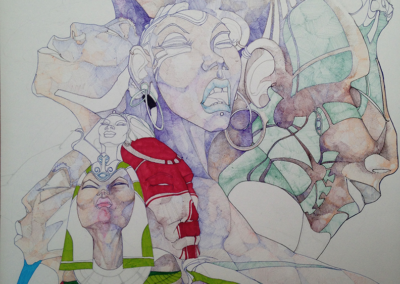 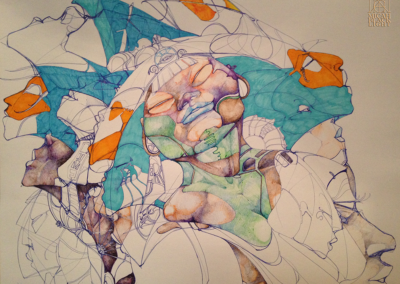 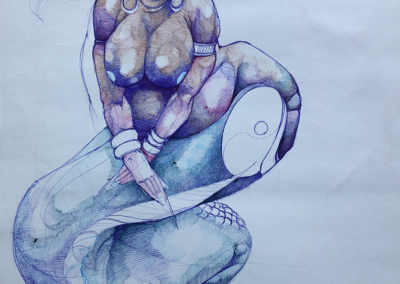 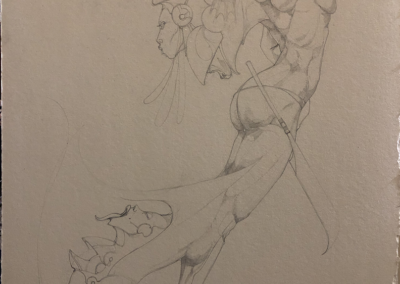 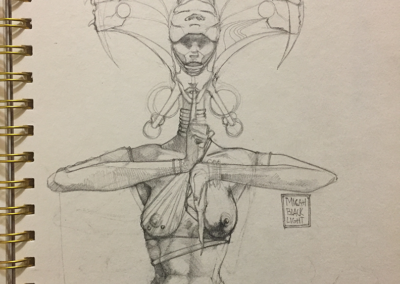 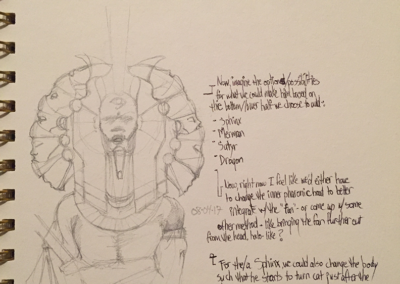 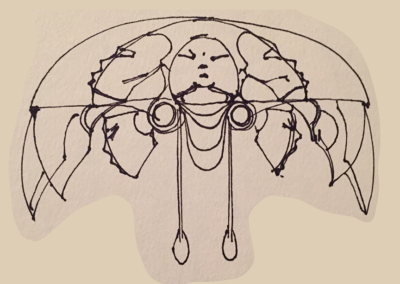 PAINTING WITH MY PENS:
Signature Style of the Faced Project

I call the technique “Painting with my pens” because that’s what it feels like to me when I employ it. I have some experience with watercolor and I’ve also sporadically used oils at different times. In truth, convenience was the ultimate deciding factor that had me more or less set those mediums aside: I want to be able to sit down and work at any moment, in any location. Ballpoint pen affords me that luxury. I can take my art with me anywhere I go with very little set up.

Initially, I began working in pen for one primary reason: it forces me to work with my mistakes. I think it was right around my freshman year of college that I found myself doing two things I no longer do: I was erasing copiously, and tossing drawings I didn’t like in the trash and beginning afresh. I picked up the pen precisely because I cannot go back and erase or start over from scratch.

I must, perforce, navigate every line and stroke I make, intentional and otherwise, and find ways to make these marks convey what I wish them to convey. It pushes me as an artist and I believe it gives me an additional experiential context for working through mistakes and missteps in real world situations as well.

More recently, I gave myself a sort of self-enforced rule that I never abandon a drawing without first giving it more than ample time to try and bring it to a place where I can at least stomach looking at it, and at best, come to love it. I LOVE detail and can become obsessive with it if I don’t catch myself. I love lines and I feel they speak to me sometimes…many times.

Often times, I’ll begin with an idea in my head, and almost watch myself as if from the outside looking in when the lines begin dictating to me where they should go, and what form they will ultimately take. My process then becomes a back and forth between what the Muses wish, and how I wish to convey those wishes.

This internal interplay, when combined with using ink and forcing myself to take a drawing as far as I can take it before giving up on it, is what ultimately brought me to my signature style.