What Does Freedom Taste Like? a response to the recent Occupy Oakland police violence

Does it smell like cordite, and gunpowder? Fresh-spilled blood, or maybe tear gas?

Does it feel like billy clubs and rubber bullets? Does it sound like panic, and screaming and the trampling of feet? Hoarse cries for medical attention or shouted warnings? If you listen closely you’ll hear the sound of disillusionment and the splintering of faith in the ‘system’. You’ll hear the growing agitation of a people realizing the only thing keeping this entire thing together is their agreement to let it continue to happen. You’ll hear the disbelieving cries of veterans come back to a country that serves them with batons and cordons and pre-dawn raids and vitriol. The stories of Tehran and Cairo and Tunisia and Yemen we’ve been shown bits and pieces of on the ‘news’; the raids on protesters camps; the firing on civilians. These things that happen in far away lands; lands that are not our lands. They have not the benefit of our ‘civilization’, our polite and educated society. Things like that don’t happen here, no, never.

Except when they do.

Except when the victim the protestors are carrying is an actual war veteran who’s been shot in the skull by a rubber bullet because the police needed ‘protection’ from the ‘mob’ who happened to be protesting peacefully until they were fired upon. Until this scene isn’t being shown to you in technicolor from another country by some bought news media outlet, no. This is being shown to you via the cellphone camera of a someone you may have passed in the street on your last visit to Oakland, CA. This is happening within your very own ‘free’ country complete with tear gas and batons and flash-bang grenades and riot gear and raiding and screams and boots and beatings and cries for help- this is in America. This is in your old neighborhood. These people are your friends, your neighbors, your brothers, your ex-girlfriends. And these same people are labeled as ‘hippies’ and ‘bums’ and people who are just protesting the rich- but they’re not. 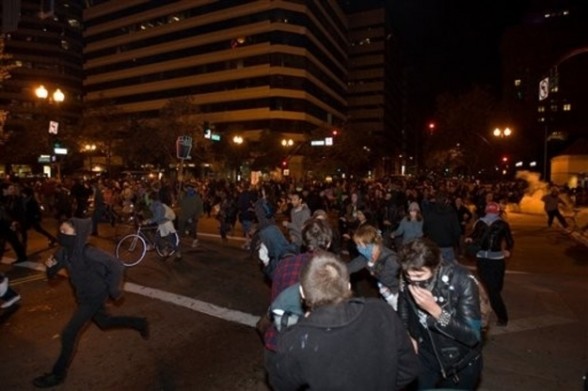 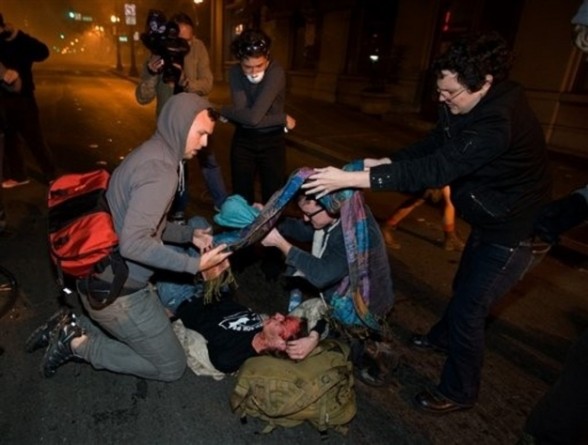 What they are protesting is why they’re being attacked. It is why they’re being labeled derivatives in the first place, in complete disregard for the fact that these protestors make up a vast cross-section of the populace. Individuals from what middle-class there is, to the poor, to the elderly; union workers, to wall street brokers to fireman to veterans to active soldiers become activists. Because it’s not as simple as a single law, or a piece of legislation, or a new political figure. It’s not as cut-and-dried as an end to taxes, or layoffs. What these people are asking for is the complete dismantling of a system that is being run by corporations to the detriment of the entire rest of the world. What they are asking for is the opportunity to be listened to and SERVED by a government that is/was supposed to be put in place for just that purpose- and ONLY that purpose. Our government is supposed to be run by people representing the people. Not corporations. Not lobbyists. Not private interest groups. The people.

What does Freedom taste like?  There is a shifting. Everyday people are listening more and more. They are paying more attention because the media is no longer so tightly controlled. When you can tune into Facebook and immediately see a thousand videos shot by your neighbors, and friends, and members of their families that directly contradict what you are being told in the ‘news’, things begin to shift. When you read a story about a someone who was attacked in the night and it was a nightmare and it was crazy and they watched people get shot at and they ran for their lives but they’re telling the story from that same park because they came back.. because they believe in what they are standing for, things begin to change. It’s a lot easier to ignore things when they’re quick. But when they won’t seem to go away; when somehow there are even more people protesting the next day; when there are even more people angry, and disillusioned, and increasingly agitated- then things begin to change.

Uniting is one of the single greatest forces for social change the world has ever known.  The minute large groups of people begin to unite, those in power start to get worried. One finger can be broken. Two fingers can be sprained. A fist is an entirely different negotiation. Some people spout slogans. Some of the people protesting do not necessarily know all the details. But they know that something is terribly wrong. They have aligned themselves with those who DO know the details. And now they are a threat. A threat to the status quo. A threat to the prevailing institution. A threat to the banking infrastructure. A threat to the tens of thousands of under the table, behind the back, and blatantly flagrant deals that are conducted in our name on a daily basis.

Maybe, as the people continue to band together, and stay together, we’ll end up shoving a collective fist in the mouth of those who would wish us broken, and show them, what Freedom tastes like.